Can Cats Have Down Syndrome?

Can cats have down syndrome? It’s an extremely common question that vets and pet health professionals are asked. Though the short answer to the question is no, it is true that cats can possess down syndrome-like symptoms. Including unusual behavioral traits, to quirky (and loveable) physical appearances.

Here we’ll look into genetic mutations that can occur in cats to give them down syndrome-like qualities, and how you can help your fluffy friend if she exhibits these symptoms.

Down Syndrome-Like Symptoms in Cats

If you cat does possess any of the symptoms we’ve listed, take her to the vet to find out the root cause. Though kitties cannot have down syndrome, they can have genetic disorders or illnesses which are similar in nature, which we’ll look into next.

What Causes Down Syndrome-like Symptoms in Cats?

In a nutshell, different genetic disorders cause different disabilities in cats. Physical and behavioral abnormalities of so-called feline down syndrome can be indicative of a host of other issues, from neurological diseases, infections, congenital abnormalities, and even trauma.

For example, cats infected in utero with the panleukopenia virus can develop several physical and other abnormalities similar to down syndrome. Cats can also suffer from cerebellar hypoplasia, a condition that causes down syndrome-like behavioral traits.

Cats whose mothers were exposed to certain toxins can also show different congenital malformations. These toxins may affect the facial structure and the neurological system. Any kind of trauma to the face and head, especially at a very young age can cause permanent neurological damage and physical injuries that may appear to have been present since birth.

Your vet will be able to do an X-ray scan, run genetic tests, and other special tests if your pet needs that to diagnose if there is any genetic disorder or a disease. There have been cases where cats have been diagnosed with a genetic disorder which is very close in nature to so-called feline down syndrome.

There’s one more thing you might want to consider. If your cat is diagnosed with a condition that requires surgery, she’ll need special accessories. For instance, if your cat just underwent surgery or has a joint problem on her neck and shoulder blades, you need to be careful with her collar. In such cases, ask your vet for help to choose the right type of collar for your feline buddy.

Why Cats Can’t Have Down Syndrome

Nevertheless, cats can have genetic mutations. But that doesn’t necessarily mean that poor muscle tone, aloof behavior, and unusual physical traits have a correlation with an extra copy of chromosomes.

Dogs on the other hand have more chromosome pairings than humans, and there are chances that they also can have an extra chromosome copy in the 21st pairing. Even so, this doesn’t indicate dogs can experience down syndrome either.

Can cats have Down syndrome? This question has become more common in recent years due to the easier sharing of images afforded by the Internet. Getting to see more cat photos means that we have the opportunity to get to know unique cats that we wouldn’t otherwise have seen. You might have seen or heard about cats that look and behave a little ‘differently’, becoming known on the Internet for being ‘Down syndrome cats.’ Although the physical and behavioural symptoms of these cats may present like a type of feline Down syndrome, it is impossible for them to truly be ‘Down syndrome’, as this is something that exists solely in humans.

What is Down syndrome?

Down syndrome is a congenital disorder in humans, affecting the people that have it both physically and intellectually.

It arises from a chromosomal defect. In humans, the nucleus of each cell contains 23 pairs of chromosomes, and people with Down syndrome have three copies – either complete or partial – of chromosome 21. They tend to have certain physical characteristics like low muscle tone, short stature and a flat nasal bridge, and will also exhibit some degree of learning difficulty.

Cats have only 19 pairs of chromosomes, meaning that it is technically impossible for Down syndrome cats to exist. That does not mean, however, that they cannot have similar symptoms for one reason or another.

kittens with down syndrome symptoms :

While it’s not possible for cats to have Down syndrome, they can exhibit Down syndrome-like symptoms, including:

If you believe that your cat has one or more of any of the above symptoms, it is important to consult your vet, in order to find out what is causing them. While cats cannot have Down syndrome due to the fact that they have no chromosome 21, they can have genetic disorders or illnesses that may cause symptoms like the ones above.

Each cat is special and unique, and cats that look or act a little ‘different’ are arguably even more special and unique than most, even if they do need a little extra support. Owners with well-known cats with genetic disorders such as Monty (a cat born with a chromosomal abnormality that has left him without a nasal bridge bone) have raised awareness of cats with special needs like this in recent years. Unique is beautiful, and cats with genetic disorders have much to offer.

As always, though, if you are considering adopting a cat, it’s important to take all of their needs into account to make sure that you’re adopting the right cat for you and your lifestyle. Cats with special needs may need a little extra love and attention that their owner must be able to give them.

Down Syndrome is a genetic condition that is responsible for severe changes in human physique and social behavior.  Cats can also have poor muscle tone, abnormal facial and body appearances, and neurological problems. 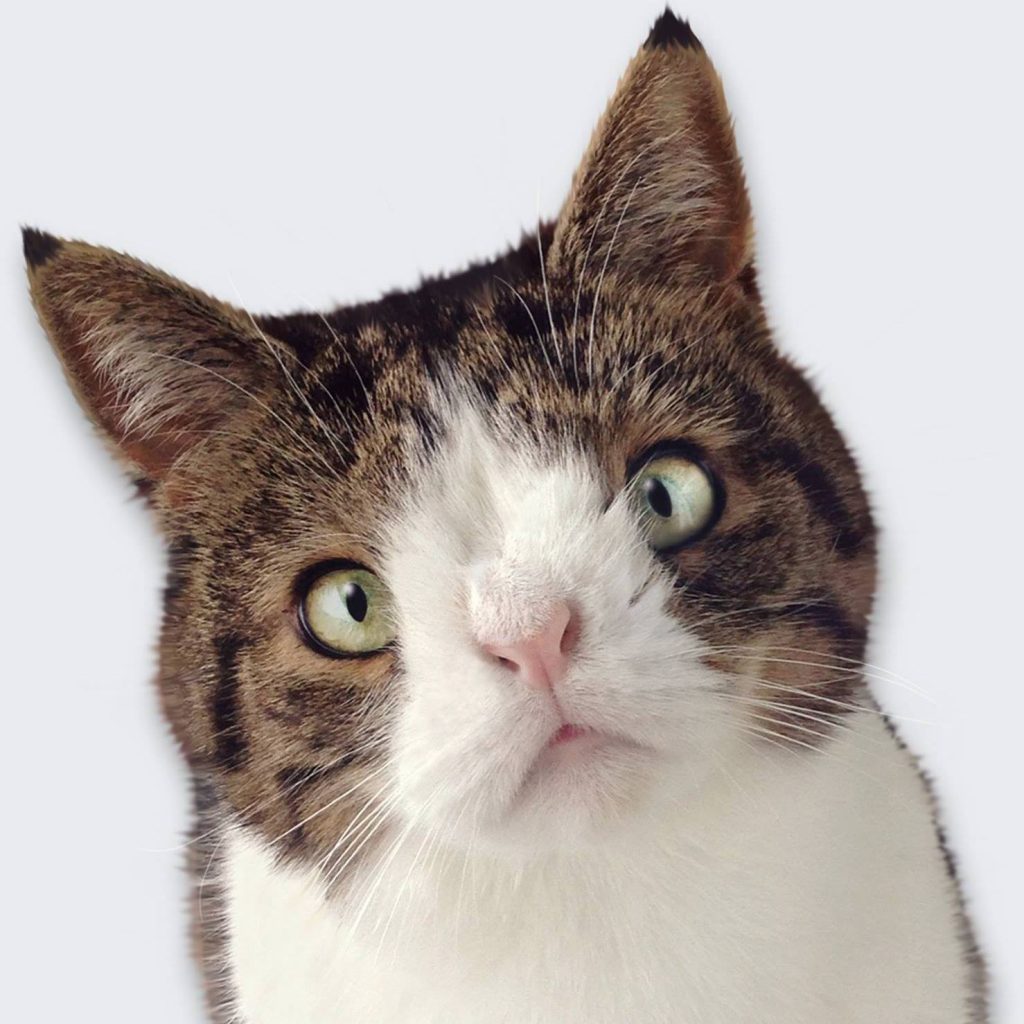 Monty, The Cat With “Down Syndrome” (Source)

So…Can Cats Have Down Syndrome?

Genetic mutations can occur in cats just like in human beings. It’s not uncommon for feline creatures to experience physical or neurological abnormalities.

But abnormalities outside the most common types of problematic behavior aren’t necessarily caused by gene mutations or extra chromosomes.

Moreover, the feline genetic structure is far different from the one of human beings. Down Syndrome is actually a chromosome anomaly. It’s caused by the forming of a trisomy, or an extra chromosome in the Chromosome 21 pairing in the human body.

Humans have 23 chromosome pairings, whereas cats have 19 chromosome pairings. As such, it’s physically impossible for cats to have a trisomy of the Chromosome 21 pairing. Dogs have a larger chromosomal number, so they can experience mutations in this pairing. But this doesn’t mean that Down Syndrome is an actual disorder among animals.

So no, cats can NOT have Down Syndrome.

However, felines can suffer from their own physical and neurological abnormalities, including other chromosomal abnormalities…it’s just that Down Syndrome is not one they can technically have.

They can suffer on a mental health level and experience intellectual disabilities. They may not answer when they’re being called or respond to basic commands. Moreover, they may appear aloof and even as though they can’t properly acknowledge their surroundings.

Such neurological complications in felines may be caused by a number of factors, either emotional or genetic, but they aren’t derived from the human-specific Down Syndrome. Nevertheless, many people attribute this disorder to felines of all breeds and ages.

Down Syndrome Signs In Cats And Kittens

Human beings can experience a vast variety of physical and mental signs of Down Syndrome.  Cats can also experience these and many other abnormalities.

When they’re still young, cats may not grow and develop properly due to lack of nutrition or genetic condition.

As they get older, felines are prone to developing various muscle issues. Cats may also suffer physical anomalies, which can be simply caused by inbreeding or by actual disease.

Felines wrongfully diagnosed with Down Syndrome either look or act abnormally compared to other cats. Droopy instead of alert ears, squished noses, slanted or wide-set eyes, poor muscle tone, and social abnormalities are common for what has become known as Feline Down Syndrome.

However, each kitty out there is unique. Don’t expect yours to look 100% like all other cats of the same breed.

What To Do If Your Cat Has Down Syndrome Symptoms 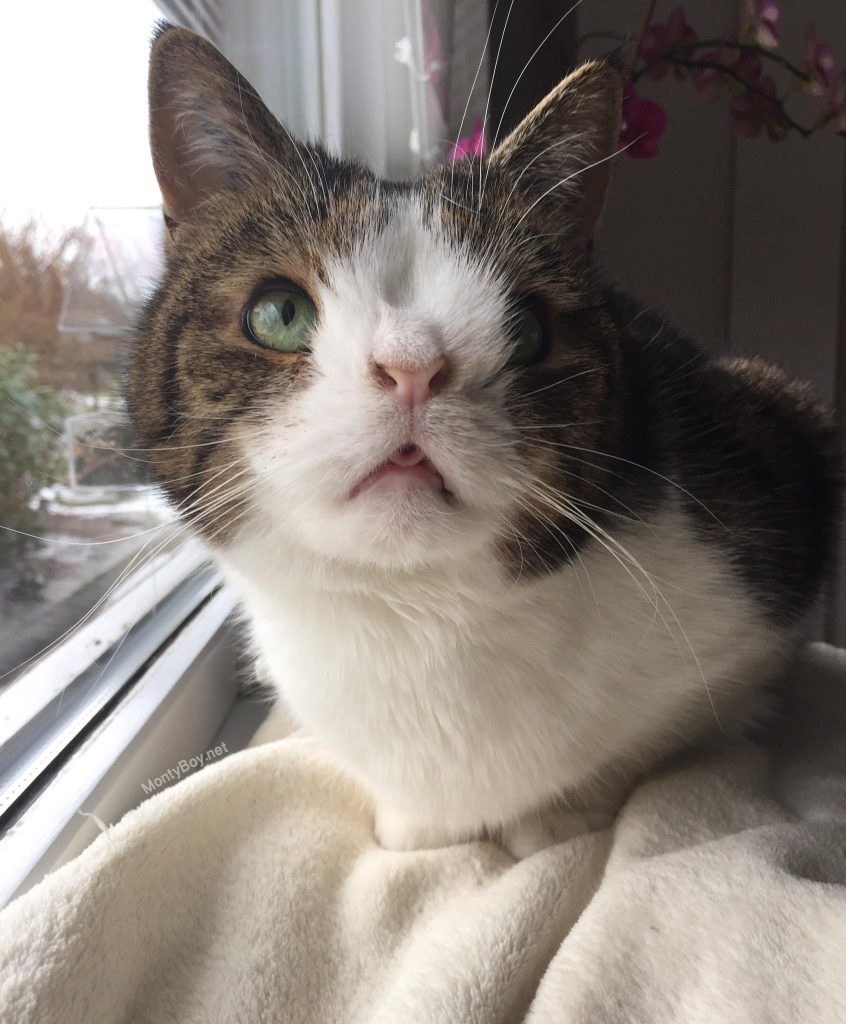 Monty, The Cat With “Down Syndrome” (Source)

There is indeed an unofficial disorder called Feline Down Syndrome. It is not recognized as an official diagnosis because, as mentioned before, cats have a different chromosomal structure than humans, so they can’t have actual Down Syndrome.